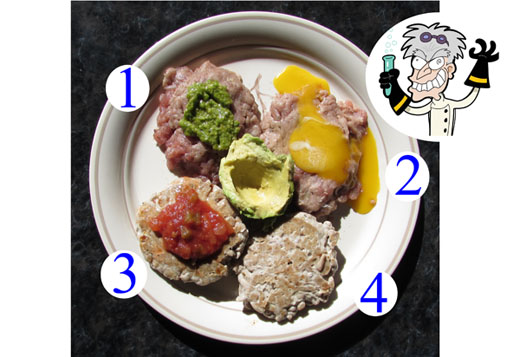 Okay…I’m not really mad, just crazy about sausage making. At least, as imbued with it as I can be after my first two endeavors. The first was a nice cabbage pork sausage from a recipe modified from my new favorite cookbook: “Great Sausage Recipes and Meat Curing” by Rytek Kutas. The one main lack in that book, and everywhere online for that matter, is anything about fish sausage. I’ve corrected that glaring omission with my second endeavor – new recipe for what I call the Sausage Lunatic Ahi Tuna Breakfast Sausage. Any other adventurous folks out there who want to have at it? Let me know if you need any pointers.

Apologies to My Epicurean Friends

…especially to the Hawaiians (Kareen), the Poles (Drezy and JanSz), the Italians (Justin), and Hispanics (myriad).

My recipe blows ethnicity out of the water, since I combine ingredients from all those sources. I hope you all forgive me.

What’s with the Numbered Dish?

As a scientist, I am trained to test multiple competing hypotheses to see which one is correct. Since I no longer have a research lab, my chemistry experiments are all in the kitchen. Each number above represents a different “hypothesis” – meaning a different way that I prepared the patty for organoleptic (taste) testing.

Am I being scientific enough for you? Too much? Well, deal with it.

Anyway, here are the keys to the number code:

Since this is a “scientific” experiment, it has to have results and conclusions.

Note that this article isn’t peer-reviewed – so up yours, my former peers! (American Journal of Botany, are you listening?)

Here is what I decided after a full breakfast of all four patty-preps, plus a half of an avocado:

First off, the difference between raw and lightly cooked is tremendous. Raw ahi tuna sausage is very mealy. Not a particularly pleasing texture, although not as objectionable as raw liver (you had to be there). Still, raw is very moist and tasty.

Patty 1. Raw aside, the pesto sauce did its thing and really flavored up this patty.

Patty 2. The egg yolk contributed nothing significant, flavor-wise or texture-wise.

Patty 3. Slightly cooked tuna suffered from the same malady as most cooked tuna – i.e., it was a bit dry (in spite of my strategy to moisten it up with pork fat back; see recipe below). The picante sauce was a nice touch, though. It felt just right for a southwestern dish here in downtown Arizona.

Patty 4. The straight patty was so spiced up from the recipe that it was truly wonderful without any added sauces.

And the winner is…

Yup, I loved them all and will have them again.

One of my goals was to find a new approach to eating raw seafood. I eat a lot of it, mostly in the form of Hawaiian Poke (either ahi tuna or sockeye salmon). My tuna sausage met that goal.

A quarter teaspoon each of the following:

Gotta have some onion. In this case a small yellow onion, diced and lightly sauteed in bacon fat.

Chopped up the fat back into approximately quarter-inch chunks.

Mixed both meats with onions and all spices in a bowl. Crammed through my electric grinder using the medium pore plate.

Add the half avocado and this breakfast filled me up. I imagine this is what a snake feels like after swallowing his weekly squirrel, or whatever. Maybe that’s why I feel like I want to go out in the sun and lie on a rock.

This experiment was a major success. It is hard to go wrong with these ingredients. Next time I will include less white pepper (a bit too spicy for my wimpy taste buds).

I began the whole sausage-making process at around 4:30 PM and finished just before 6:00 PM. This means that I crossed over into “Happy Hour” territory during the preparation.

Therefore, as it turned out, a Moosehead Lager became an essential ingredient – for me, not the sausage. I know that some of my role models (JanSz, this means you) would probably prefer an IPA. No matter. You get the point.

Also, since my endeavor was such a success, I felt like celebrating. After I placed the sausage in a bowl to chill overnight, I just had to have an evening cocktail as my way of self-congratualtions. My favorite cocktail these days is a Manhattan (or Old Fashioned): a shot of sweet vermouth, two shots of Irish whiskey, a splash of bitters, and some ice.

That is a great way to end the day.

Come to think of it, that would be a great way to start a day, too.