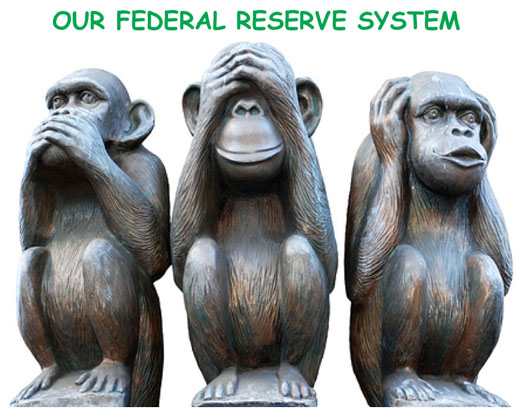 HUGE WARNING!!! Unless you are a BIG fan of horror, DO NOT read anything about how the Federal Reserve System works. EVER! (They did give me a great idea for how to solve the national debt, though. Read on.)

Some Critical Concepts to Remember

A few things you should know:

Better Than the Comics Page

Public news agencies (e.g., ‘McPaper’ … aka, USA Today) offer up plenty of information about the economy. Just a little digging, though, will reveal what a load of BS it really is. Indeed, if you are into dark humor, modern business news is better than the comics page. It should be re-titled something like, Polyanna Business Reports. More fantasy than fact.

The main public hullaballoos these days are driven by political eunuchs (and their female equivalents) who have no power to do anything effectual. That’s because the Fed is in control. Not congress. Not the president. Not the states. The Fed.

Russian meddling in American elections is like a mosquito on the rear end of an elephant in comparison with the power of the Fed. Other comparative mosquitoes include healthcare legislation, armed conflict anywhere in the world, climate change — you get the picture.

With the advent of Quantitative Easing, the Fed started backing the creation of gobs and gobs of new money. This new money is not backed by collateral (e.g., that quaint old gold standard we once had, before Nixon) — just debt. Meaning: WE OWE IT BACK!

If the Fed can create fiat currency that drives up the national debt, we should be able to create fiat money to pay it back. My solution is, therefore, for every American household to have access to a really good printer, and some currency paper (i.e., cotton/linen fiber mix). Then just start printing up money!

Your own personal QE.

Details of a Horror Story

Just in case your curiosity gets the better of you, the details about the Fed that are scarier than any Stephen King novel are the topic of a terrifying book by Danielle DiMartino Booth: Fed Up – An Insider’s Take on Why the Federal Reserve is Bad for America.

You have been forewarned.