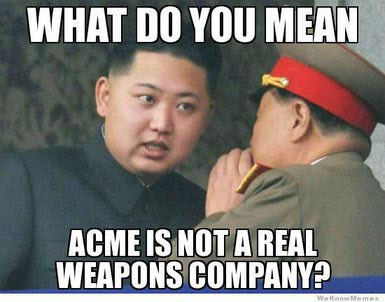 Oh, those jokesters in North Korea are at it again. Apparently they haven’t updated their school physics textbooks since before 1952. North Korea’s announcement that they have tested an H-bomb has physicists around the world chortling in their beer. (Yes, my fellow geeks … we can, indeed, chortle in our beer.)

The North Koreans have apparently confused their atomic (fission) bomb with a hydrogen (fusion) bomb.

Of course, all of us who took basic physics anytime since the 1950s know that fusion and fission are MONUMENTALLY different from one another. The differences are so obvious that even this morning’s McPaper (aka USA Today) had a cogent explanation that anyone can understand. Look it up.