Maybe I’m a golf snob. The best three holes on the PGA Tour for watching in person used to be the 15th-16th-17th at the Waste Management Phoenix Open. To quote Yogi Berra: “It’s so busy that nobody goes there anymore.”

I’ve got to admit that the Phoenix Open is, indeed, one heckuva party. I ran into one of my students there a few years ago, at the 18th green during an exciting finish on Sunday. He was on his way to the 16th hole to ‘pound some beers’ and didn’t have a clue about what was going on. This seems to epitomize the tournament these days.

Image what it was like before the party got out of hand. Before the grandstands totally encircled the 16th hole, the ideal spot to watch the tournament was a little hill next to the tee box on the 17th hole (see asterisk in photo below). From there I could see up close what was happening on the 16th hole, from tee to green, and I could watch tee shots from the 17th. Both holes offered some exciting golf. The 16th because it is a par 3 with a huge trap on the left side of the green, near the final round pin placement The 17th because it is a drivable par 4 with a great risk-reward to go for it: water on the left and past the green. I’ve seen some great shots on both holes, one right after another, by just turning around in my ideal spot.

As a bonus I could watch approach shots on the 15th through my binoculars. Going for an island green in 2 on a par 5 made for some great golf. I recall seeing Ben Crenshaw hit a rocket from more than 230 yards to the heart of the green there once. Rickie Fowler infamously laid up in the final round there not too long ago, while he was still in contention. It took him right out of the tournament and he didn’t have enough holes left to catch up. 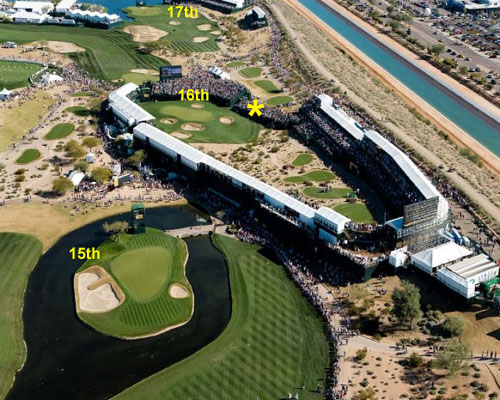 Of course, part of the craziness at this hole might be traced to the hole in one made there by Tiger Woods in 1997. The party atmosphere was already building by 1997, and Tiger’s shot just accelerated it. By that time the best 3 holes for spectator golf had already been ruined for me, so I wasn’t there to see it. Good thing it replayed on the nightly news only about a hundred times.

Am I a Golf Snob?

Maybe. Or just maybe a crotchety old man. I love to watch top players hit great shots. I love the suspense of a final round, with results on the final three holes sorting out the winner. The party could go away this year (like THAT would happen) and I’d be back again, in my favorite spot in the final round.

What do you think?